Today is the final full day in Bhutan and also we'll get to do the most "xiong" trek to Taktsang Monastery, or better known as Tiger's Nest.

As its supposed to be a 3 hour trek (for us it'll be more than that), we have to set off at 8.30am so that we can have our lunch on time at one of the pit stops.

It was freezing cold when we woke up, about -2 degrees Celsius. Kenny was unwell and didn't join us. When Chunjur found one of us missing, he immediately asked what happened and went to make arrangements for Kenny's breakfast and lunch, so thoughtful of him.

On a cold morning, our breakfast was most comforting. It was plain porridge with canned dace and black beans, minced pork. Comfort food. After a full breakfast, we finally set off to the base where Tiger's Nest is located. 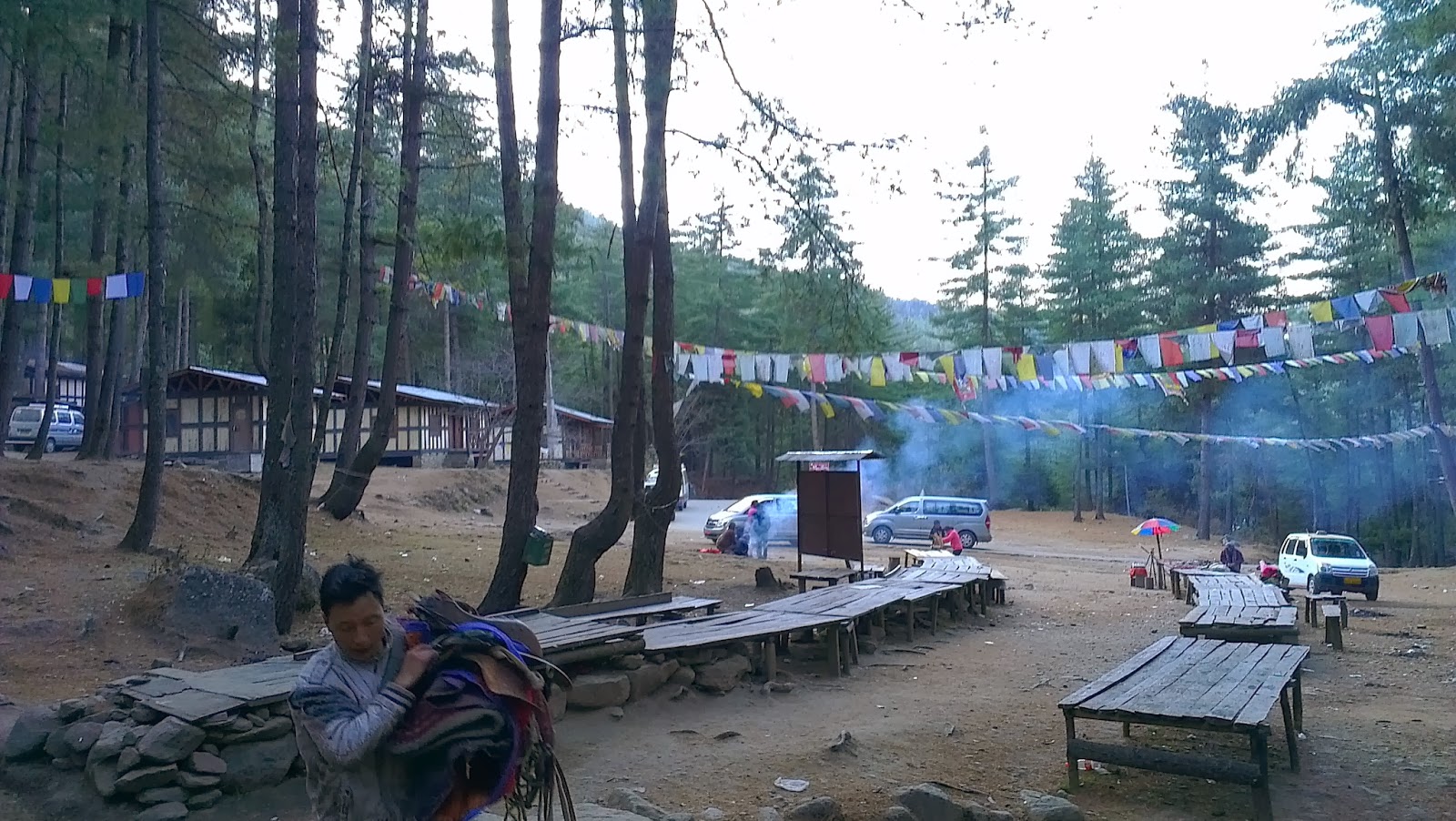 There were ponies you can ride on to get up, but only 2/3 of the way. 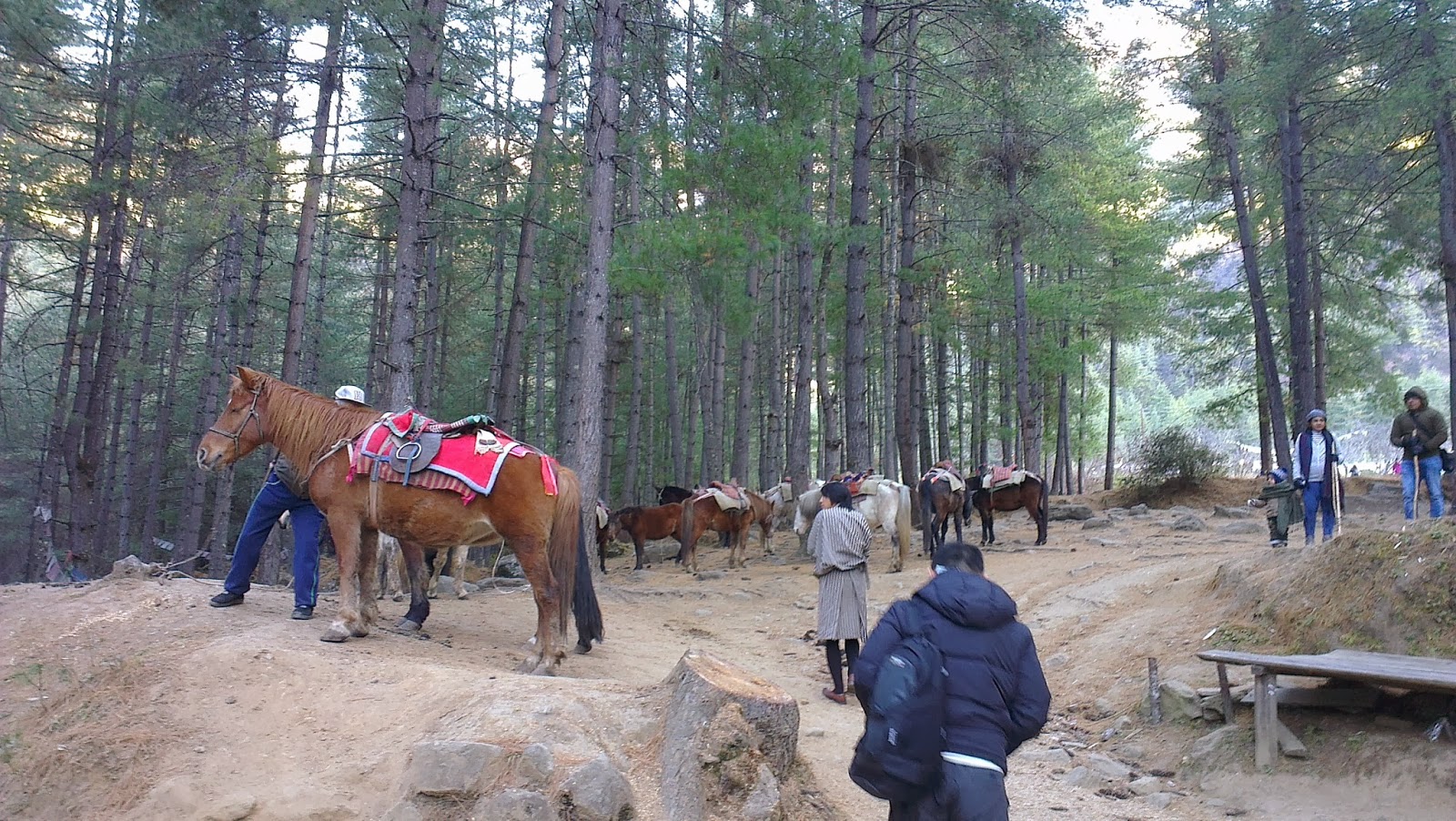 From the base camp we can already see the monastery. So near yet so far. Why oh why can't they have a cable car to bring us up??? 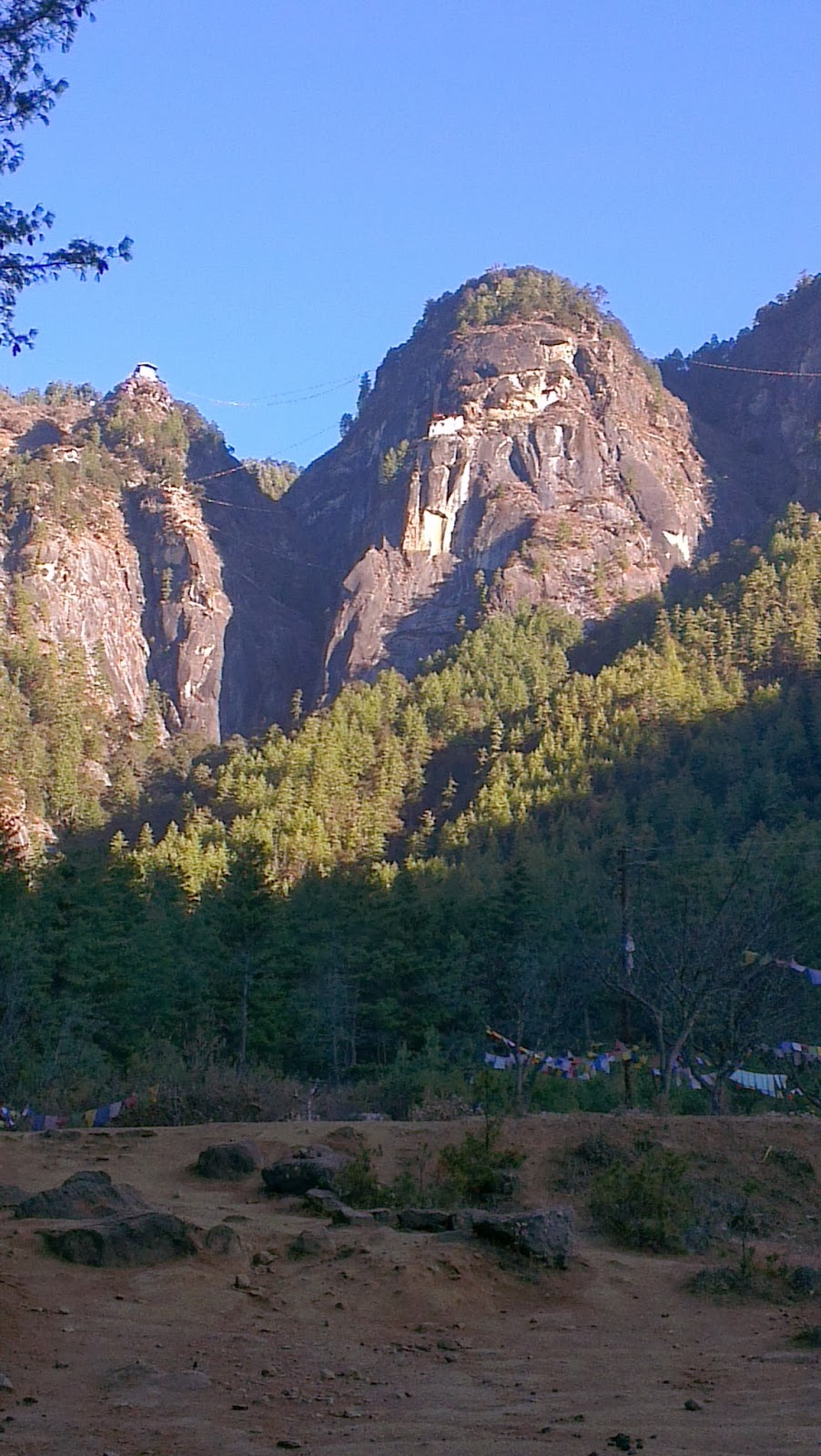 Do you know why its called Tiger's Nest? According to legends, it is believed that Guru Rinpoche, meditated there and emerged in eight manifestations and the place became holy. Can you make out the face of a Tiger above the monastery? This face was only apparent when fire broke out in the temple and soot stained the rocks above.


Although it looks so near, we can only get to Tiger's Nest by trekking up the other mountains adjoining it, going one round before reaching it.

Throughout the trek, we stopped numerous times. All the other "short" treks were meant to prepare us for this. The picture below is taken at one of the many stops we made. Tiger's Nest is nearer and deserves another snapshot. 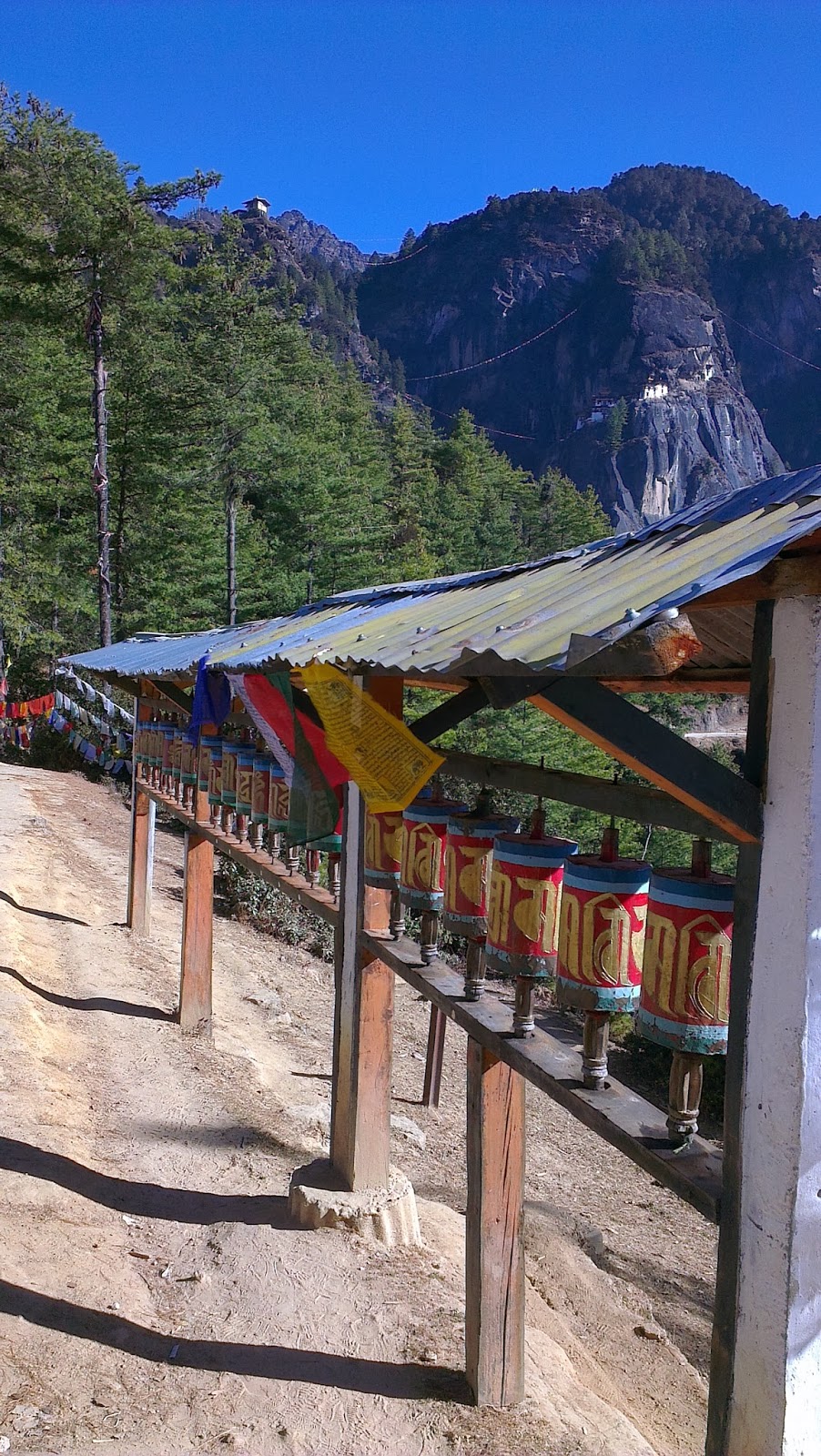 Look at the awesome scenery around us. Although the trek was really "xiong", the scenery really made it worthwhile to keep going. In fact, many people have given up and stopped at the cafeteria located about 1/3 of the journey. 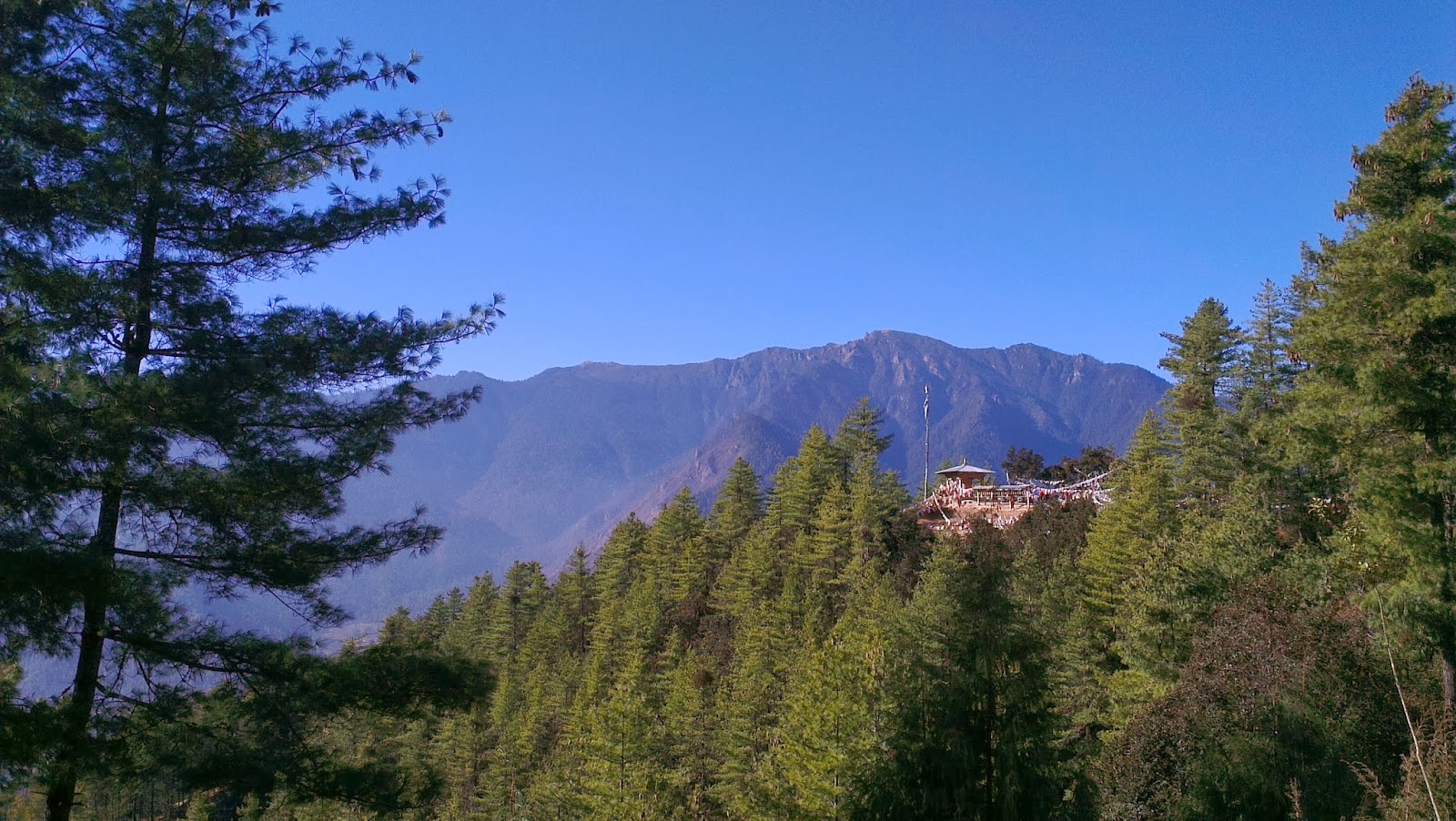 At every sighting of Tiger's Nest along our path, I took pictures of it to show us getting nearer and nearer to it. 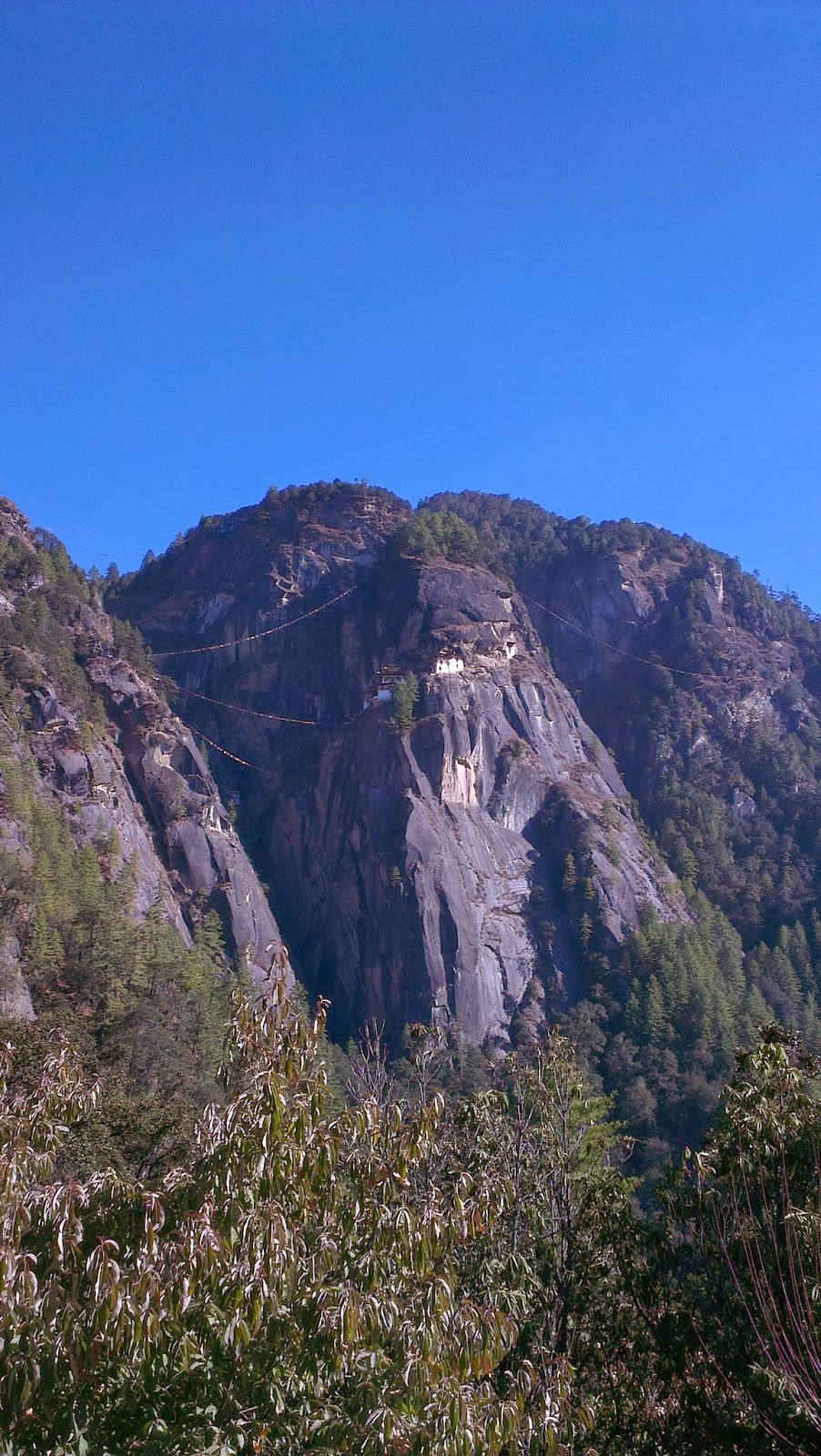 These were the conditions we trekked in. It was dusty and peppered with pony droppings. Some parts were very steep, much steeper than the picture below. 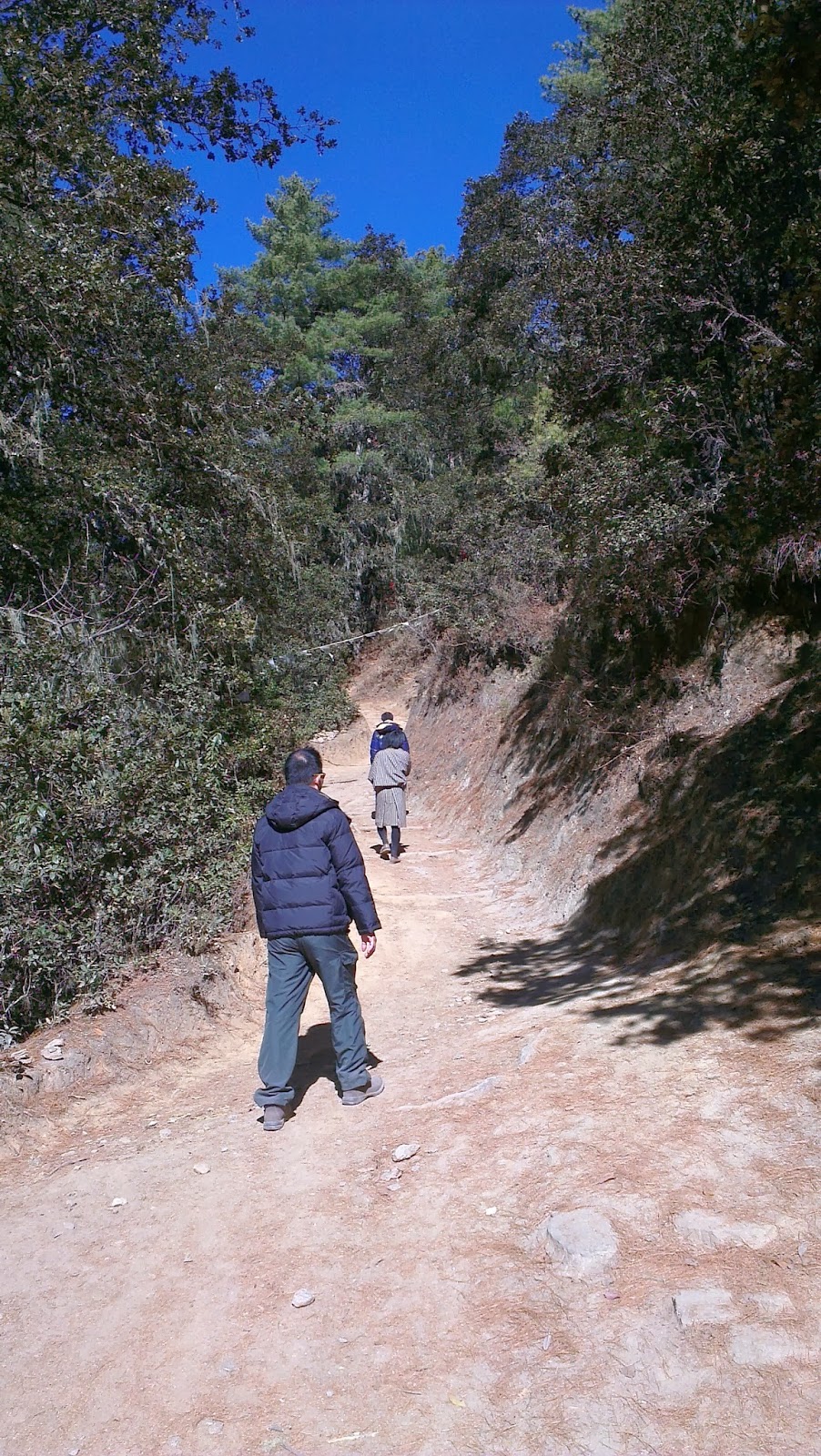 At one turning, we saw Tiger's Nest again. Can you see that we're nearly level with it? 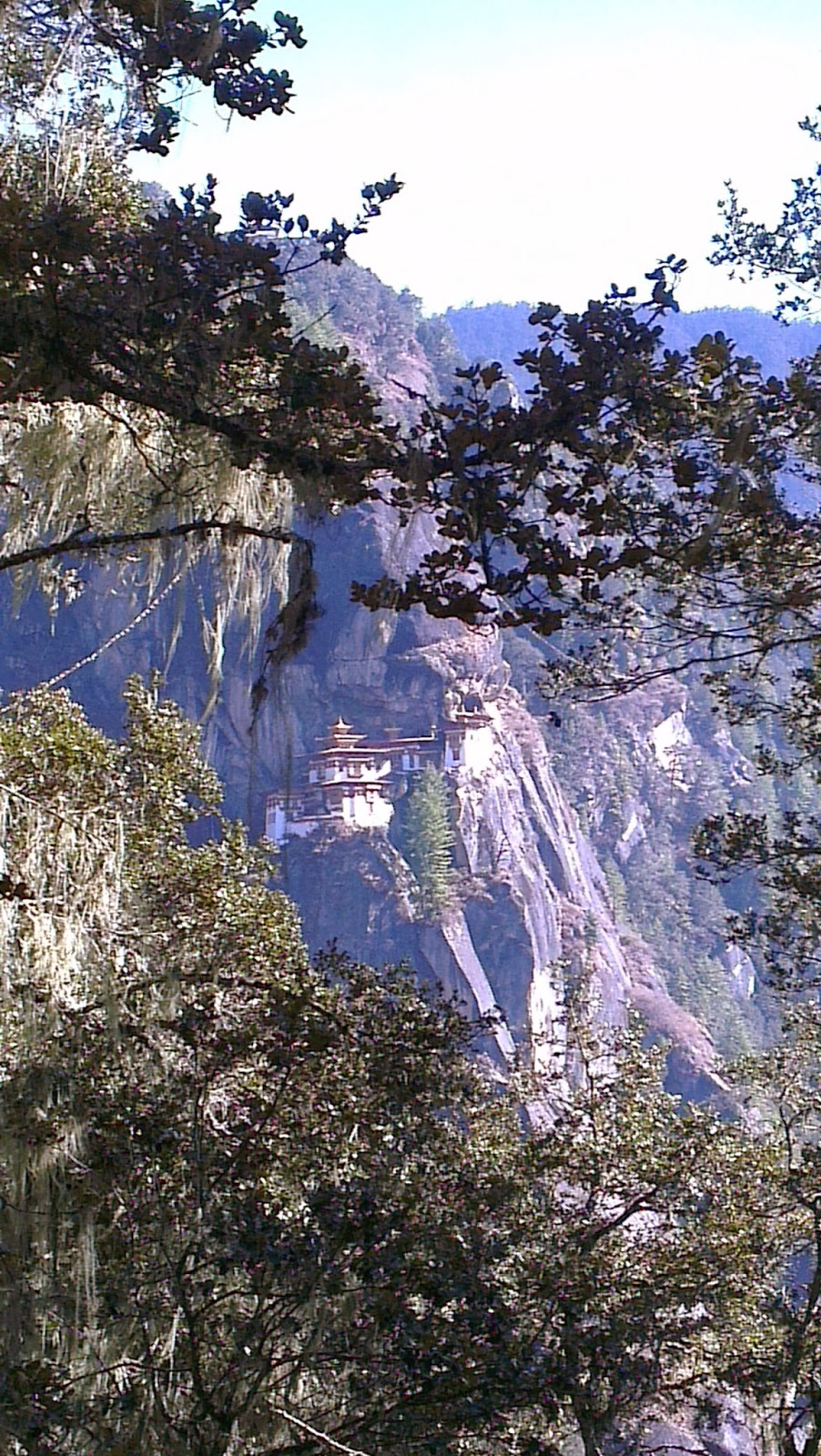 Can you see some wispy thingy on the branches of the trees? According to Chunjur, they are some sort of fungi and they only grow in conditions of high nitrogen and oxygen, indicating very clean air. Being the typical Singaporean, we quickly inhaled and exhaled more of the crisp, clear air, haha. Actually we were so short of breath from the trek, it was the natural thing to do haha. 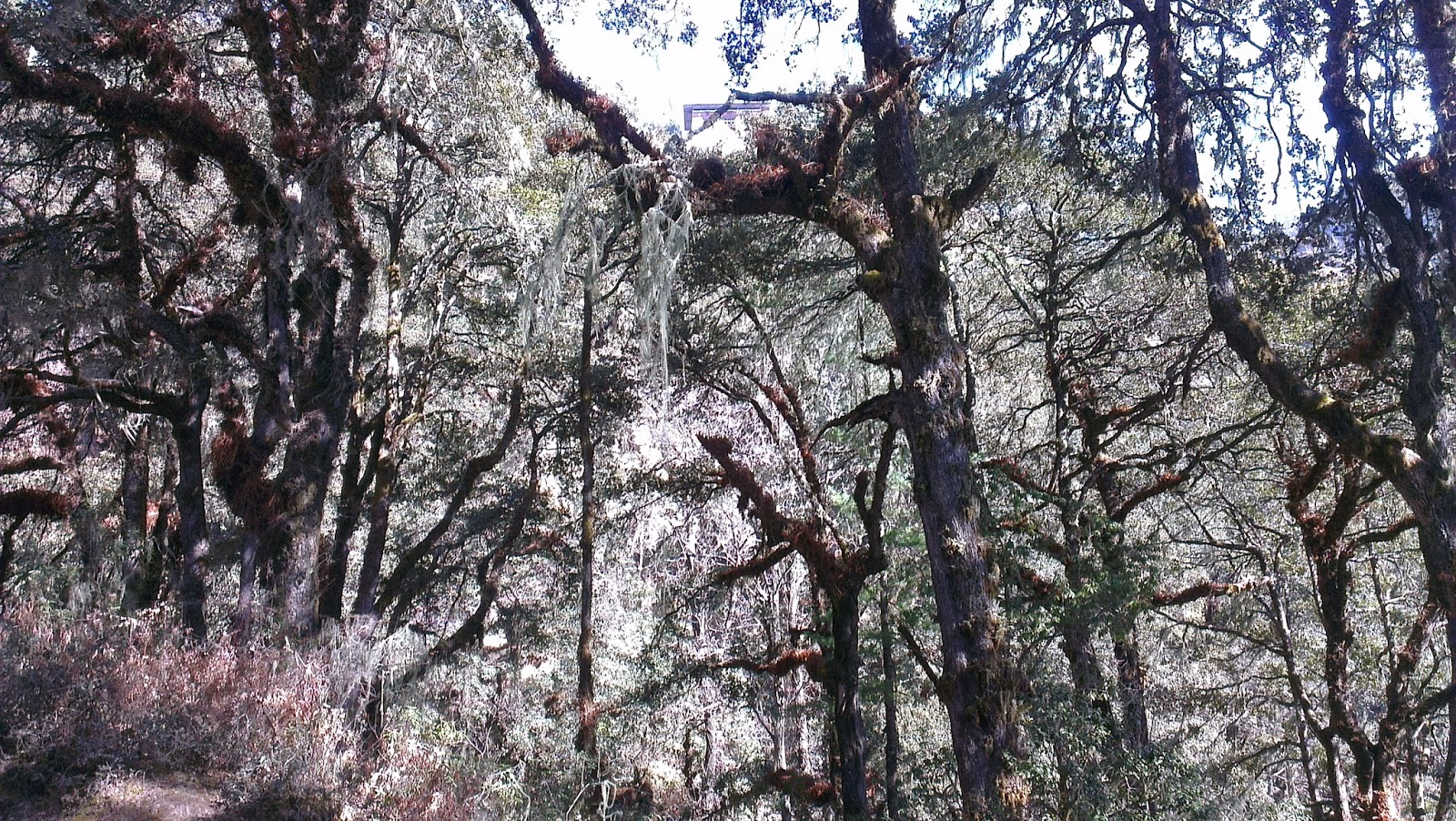 We are nearing one of the major pit stop and morale was high and we trudged on. 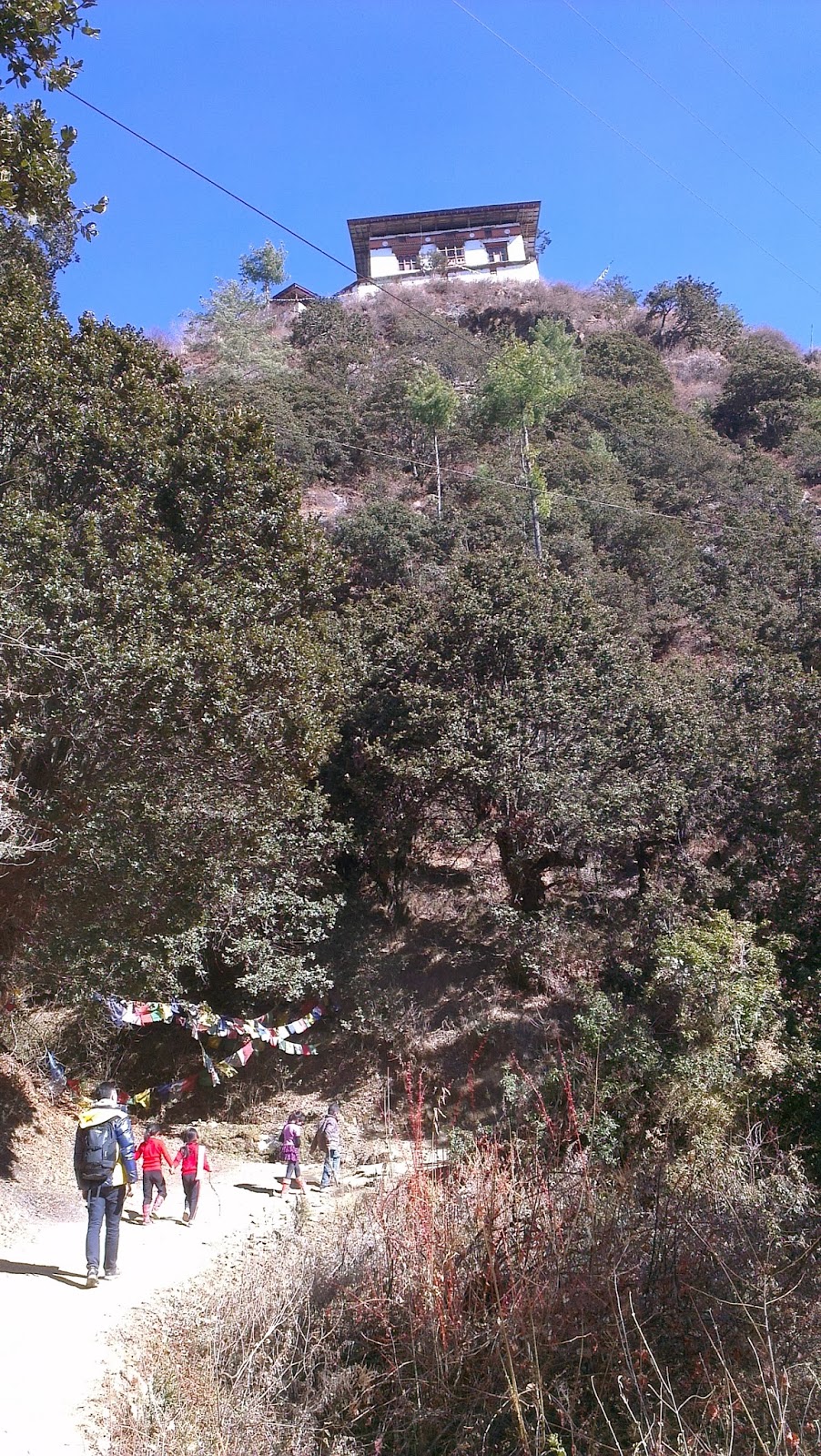 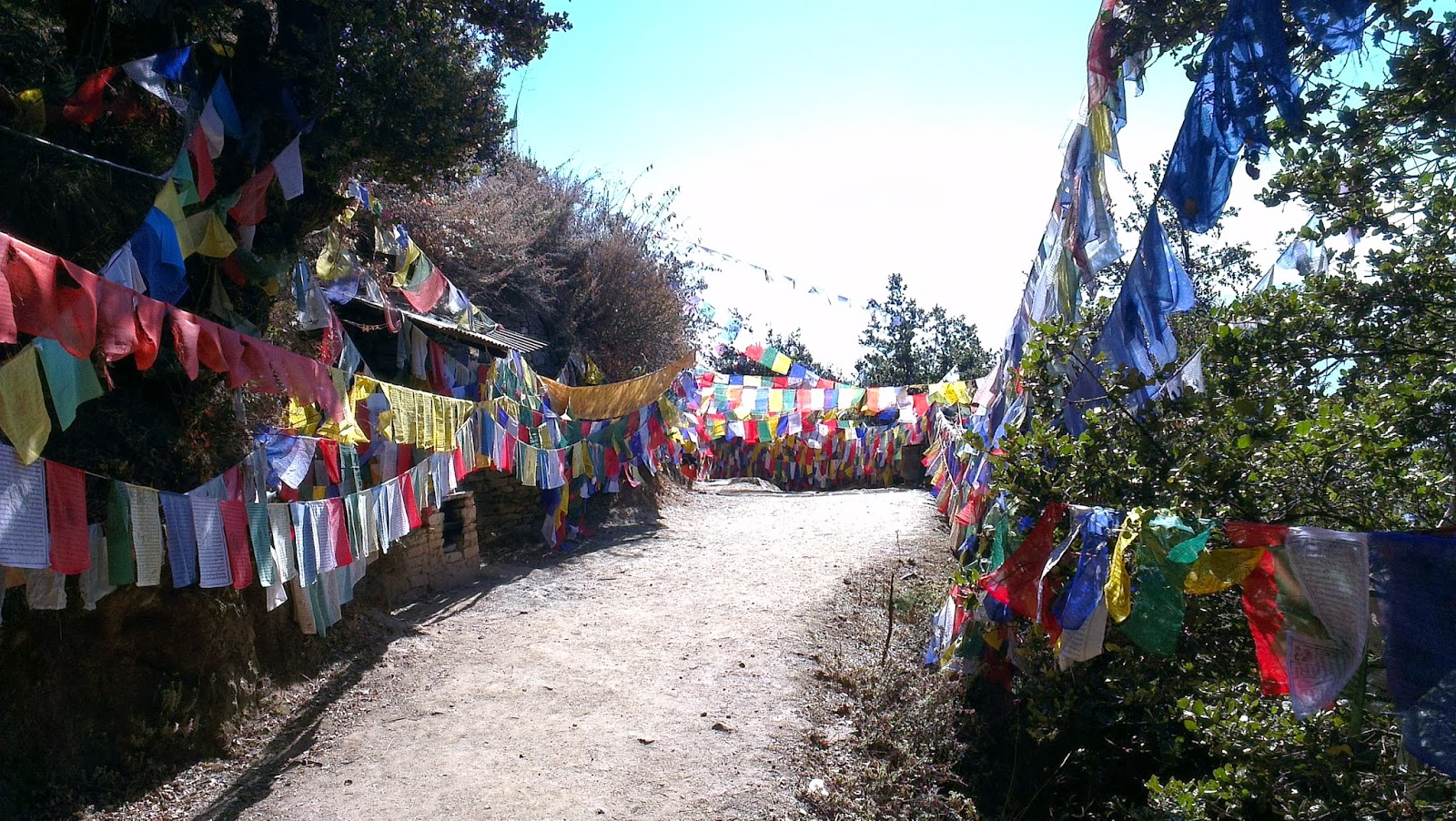 We were just across from Tiger's Nest, but we are not near it yet. 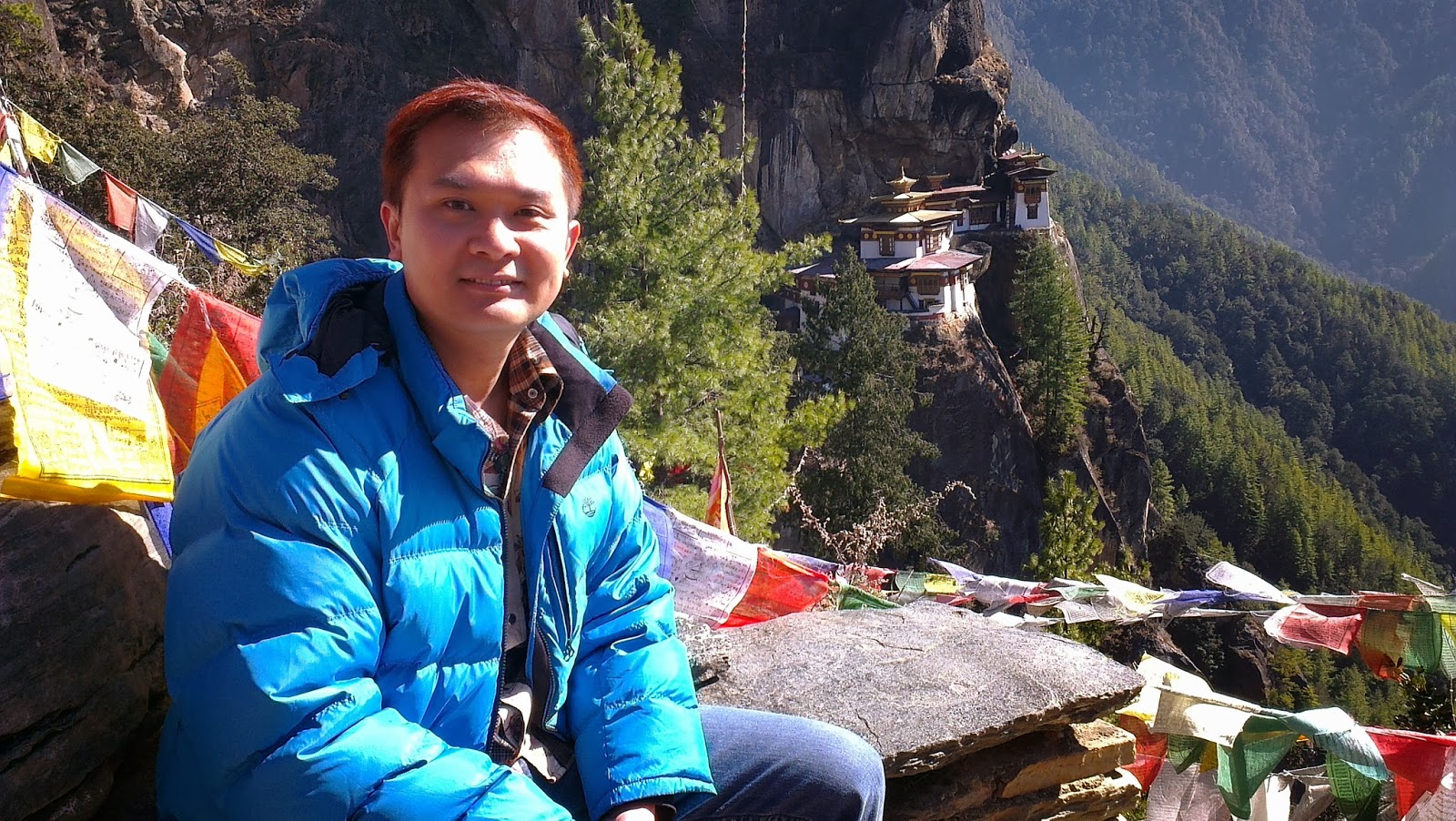 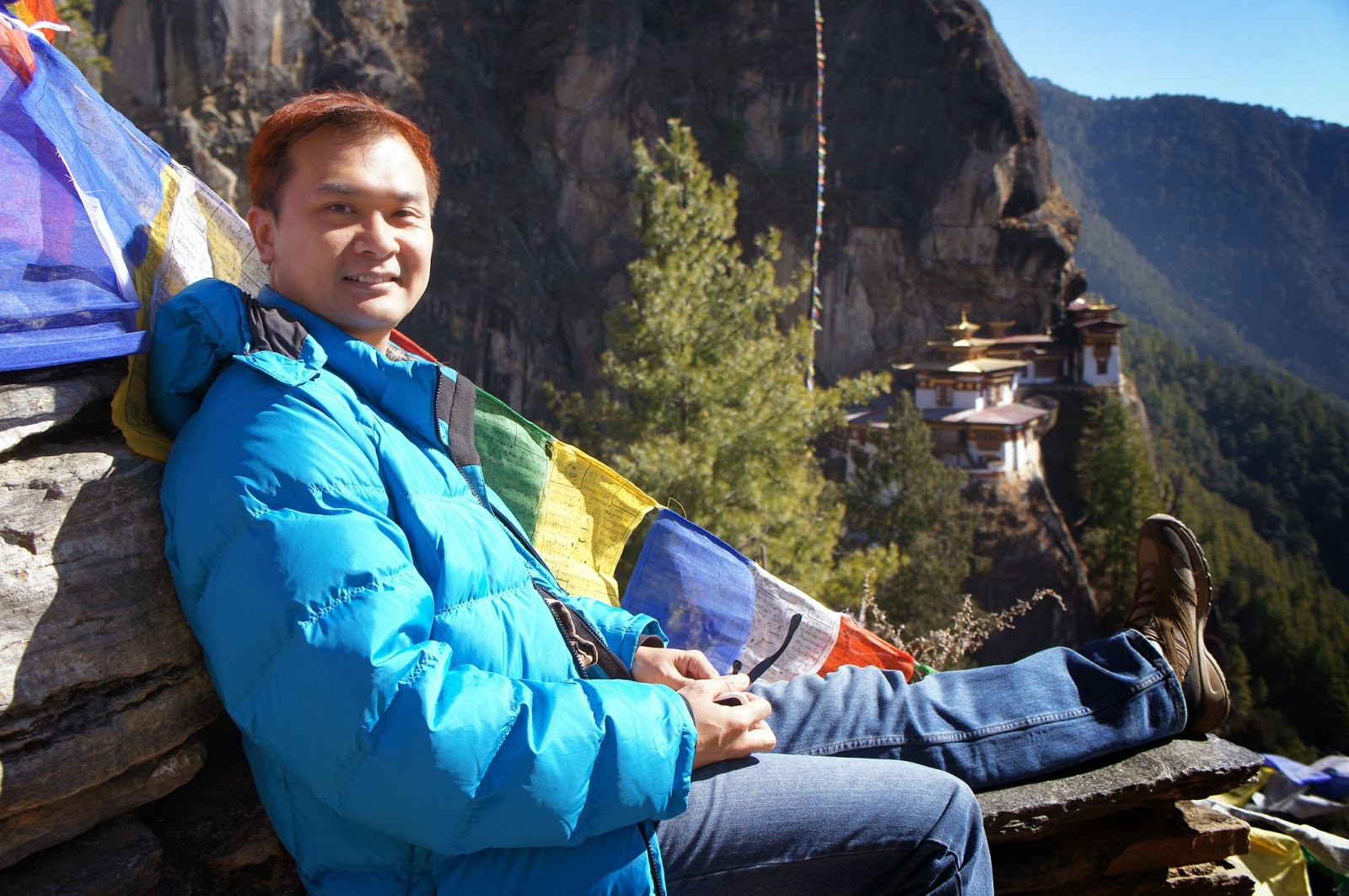 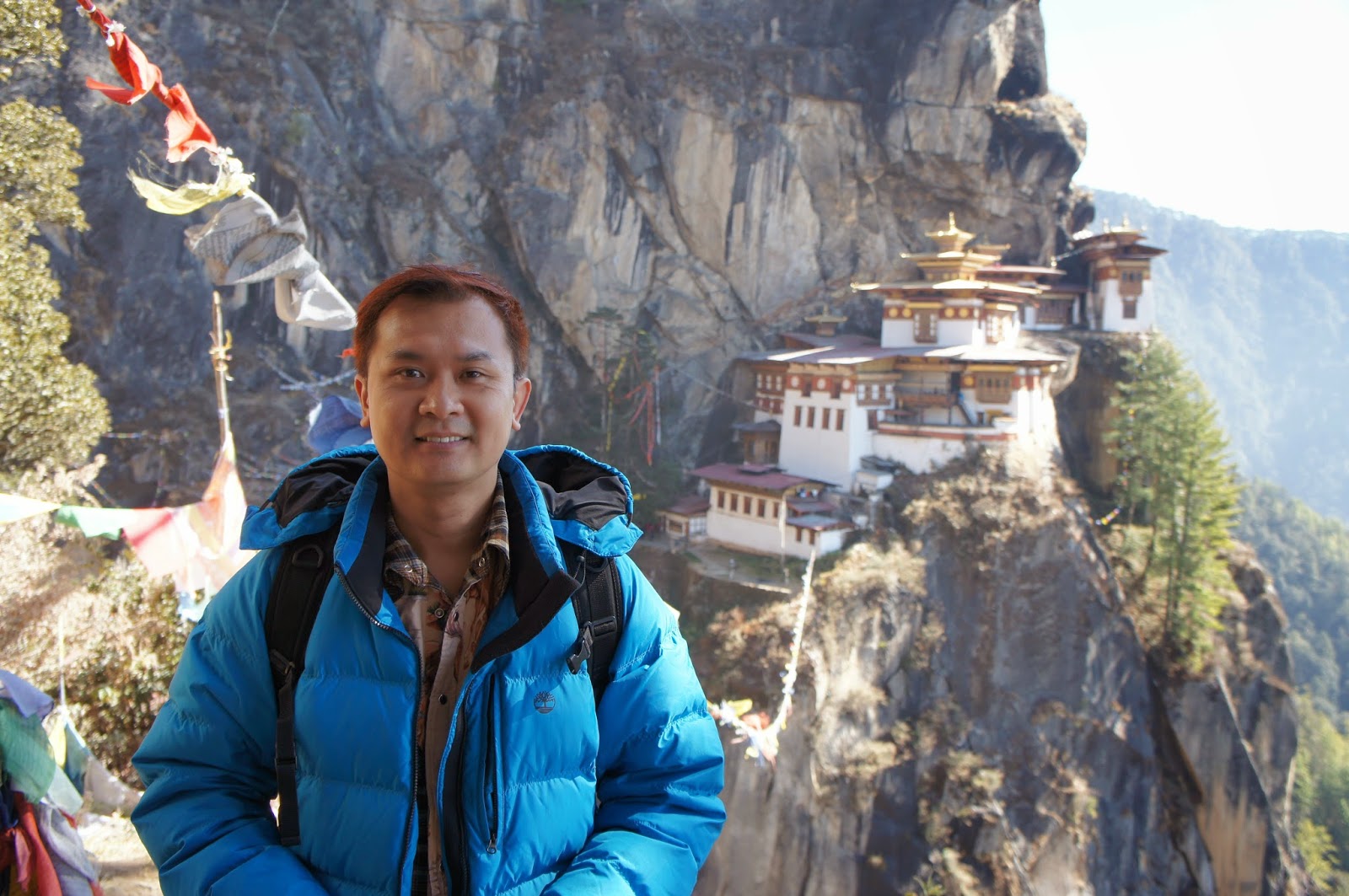 From this pit stop, we were only steps away from the famed 750 steps, the last part of the trek. We were to descend a long flight of steps through the gorge before ascending up to Tiger's Nest. 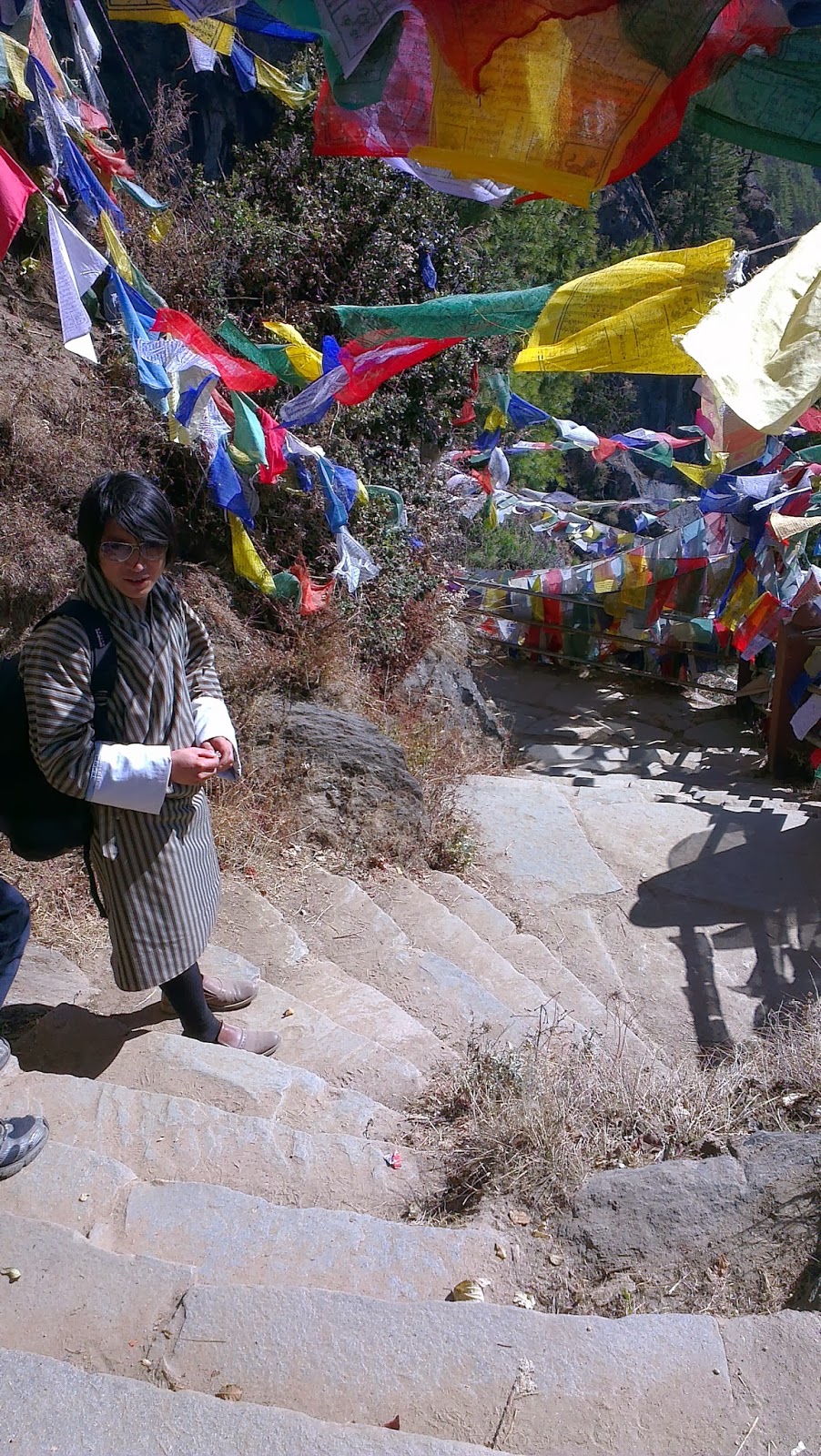 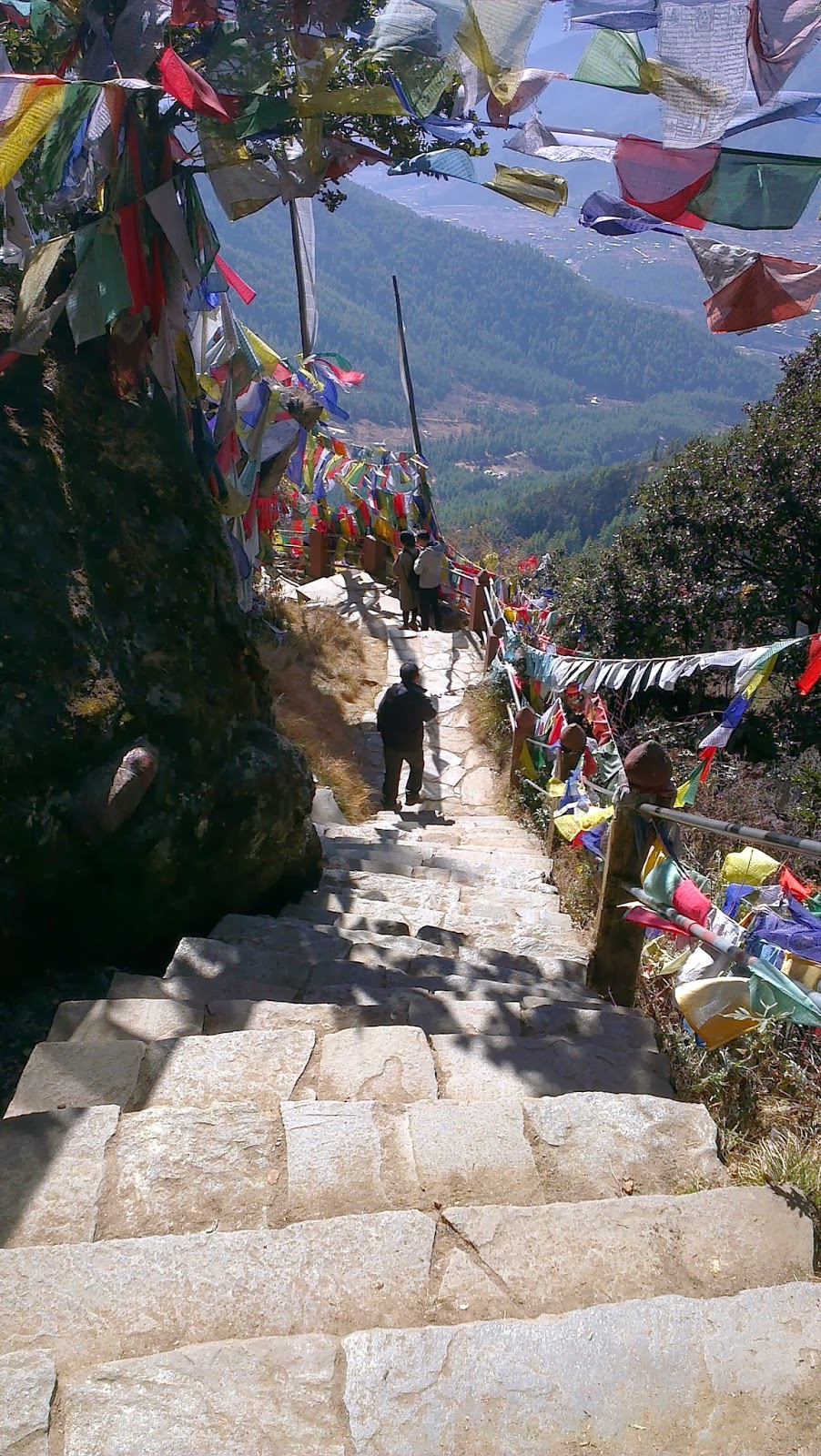 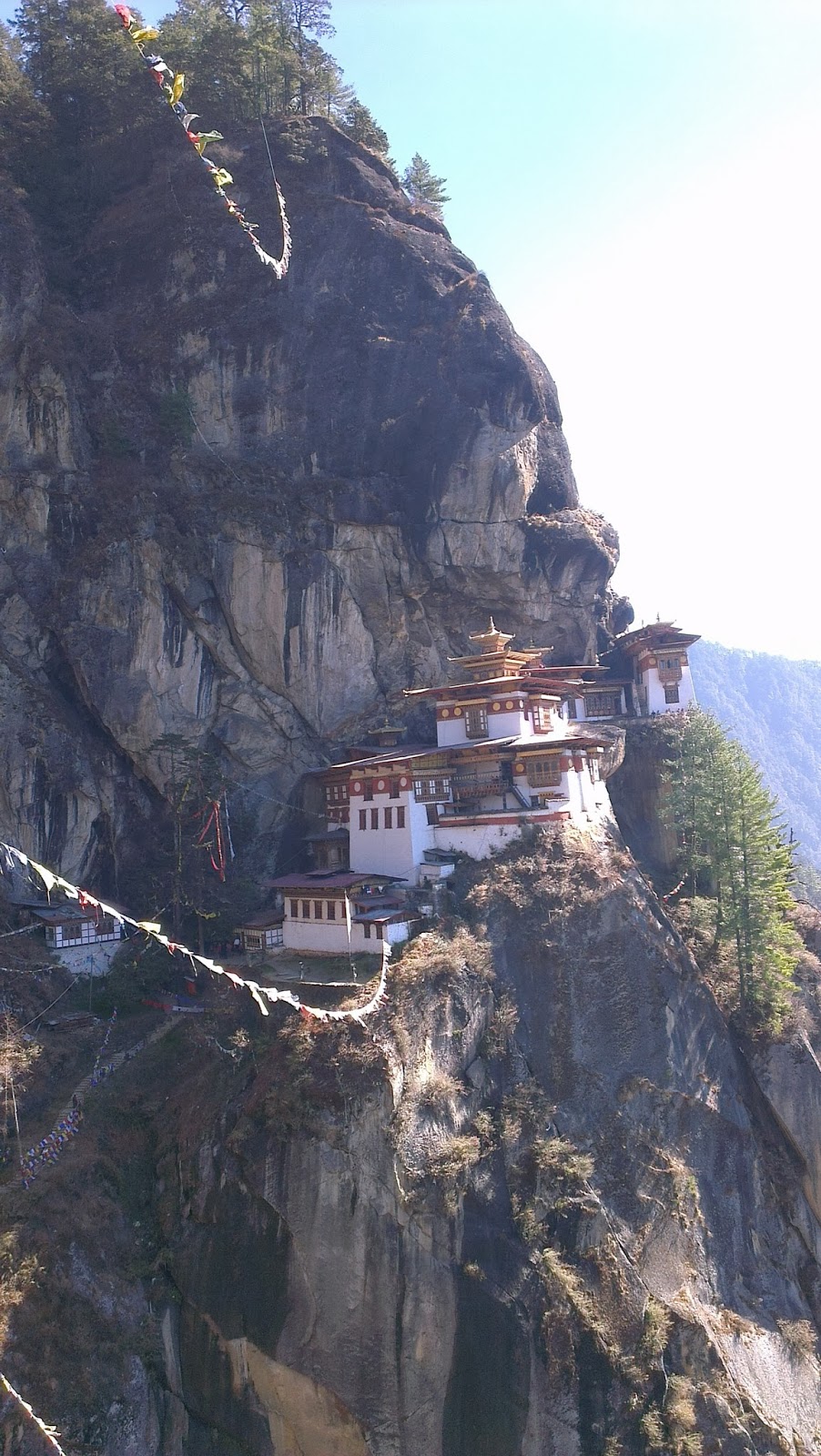 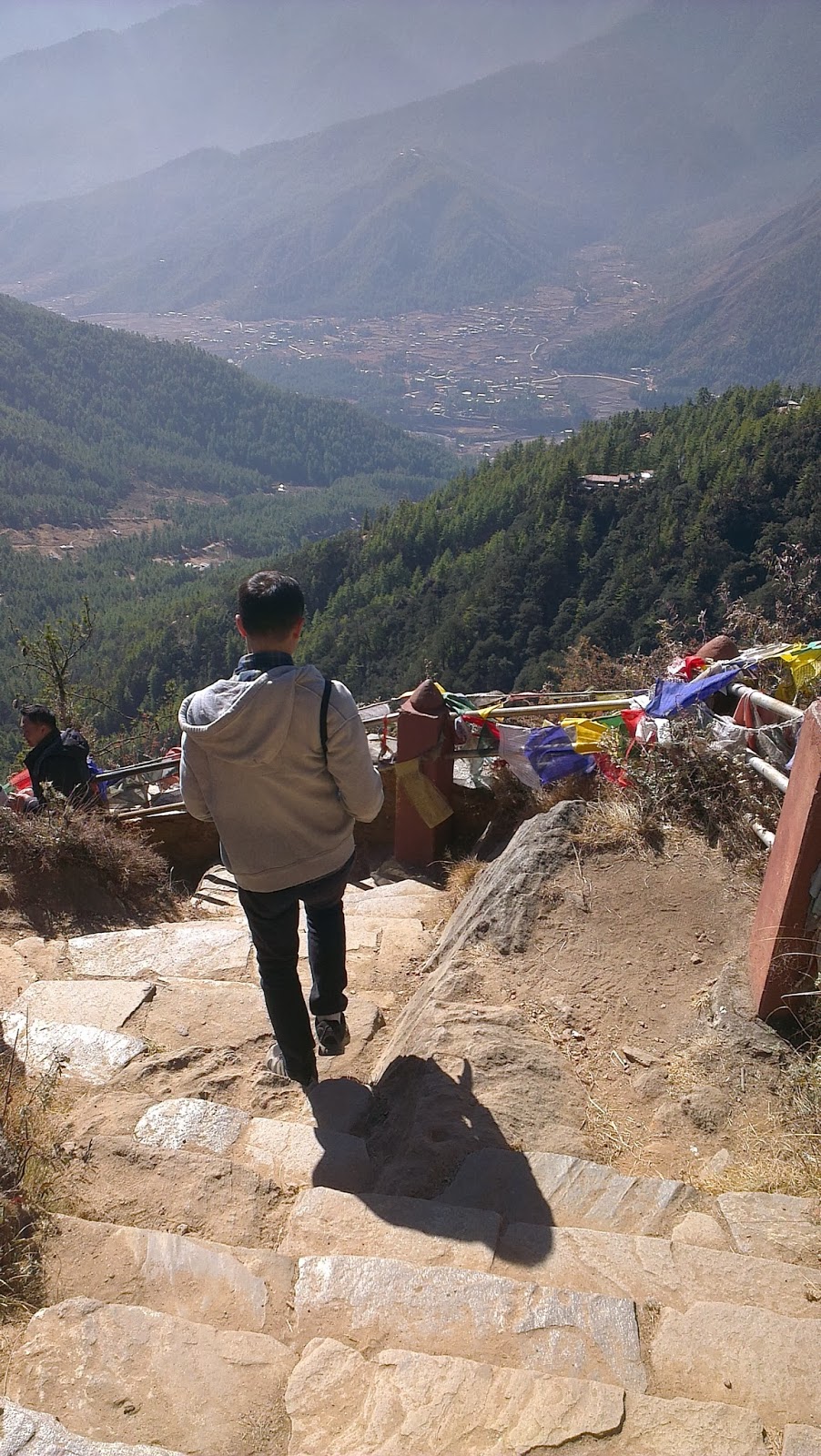 We've finally reached the bottom of the gorge and once again photo time :D 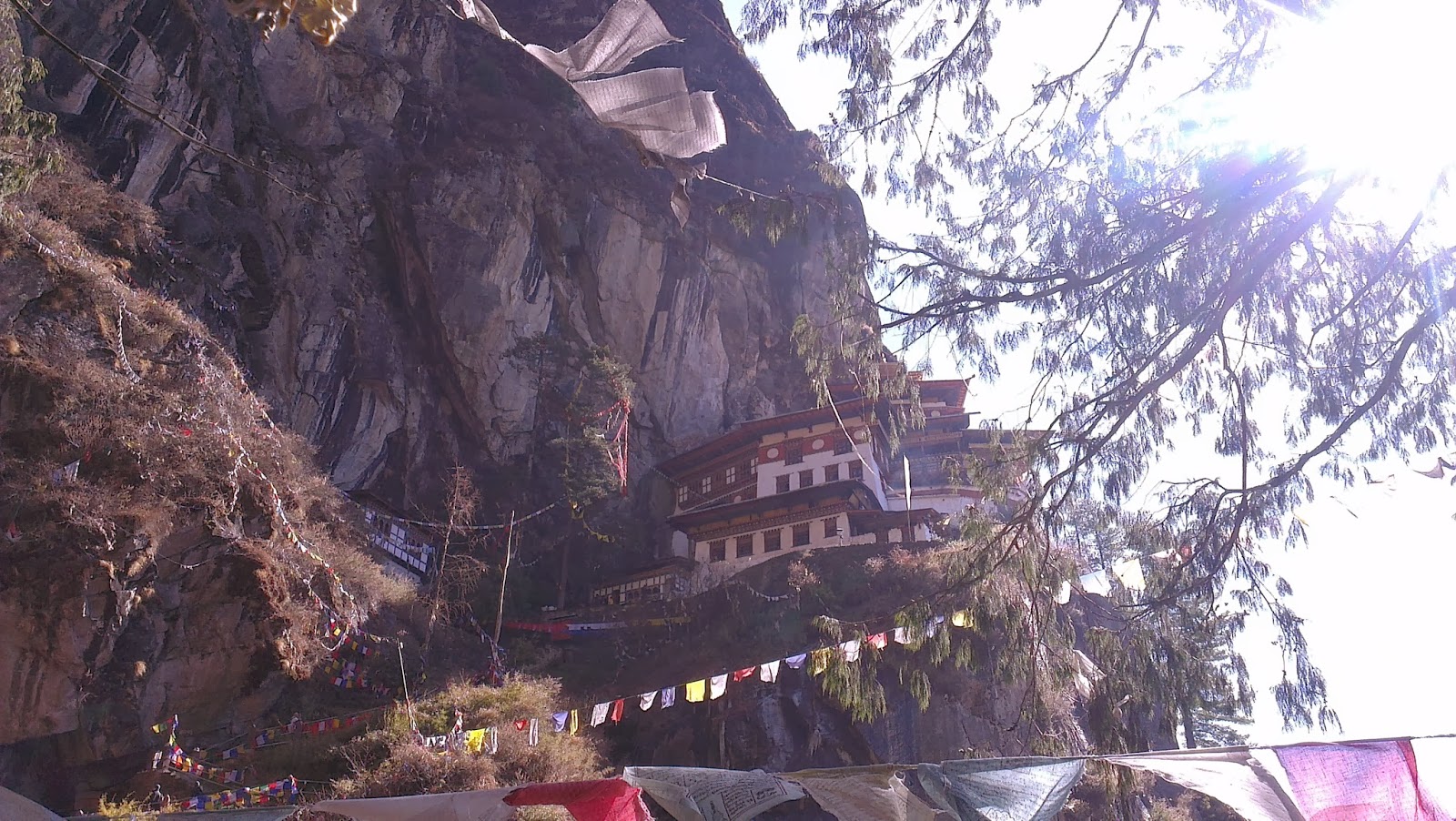 There's a waterfall and legend has it that the wife of one of the famous teachers (can't remember who) meditated in one of the caves there. After she finished her meditation months later, she had in her hand a sharp object (can't remember what object) and wanted to test its sharpness. She plunged the object into the rocks and water flowed out, and the waterfall was formed. 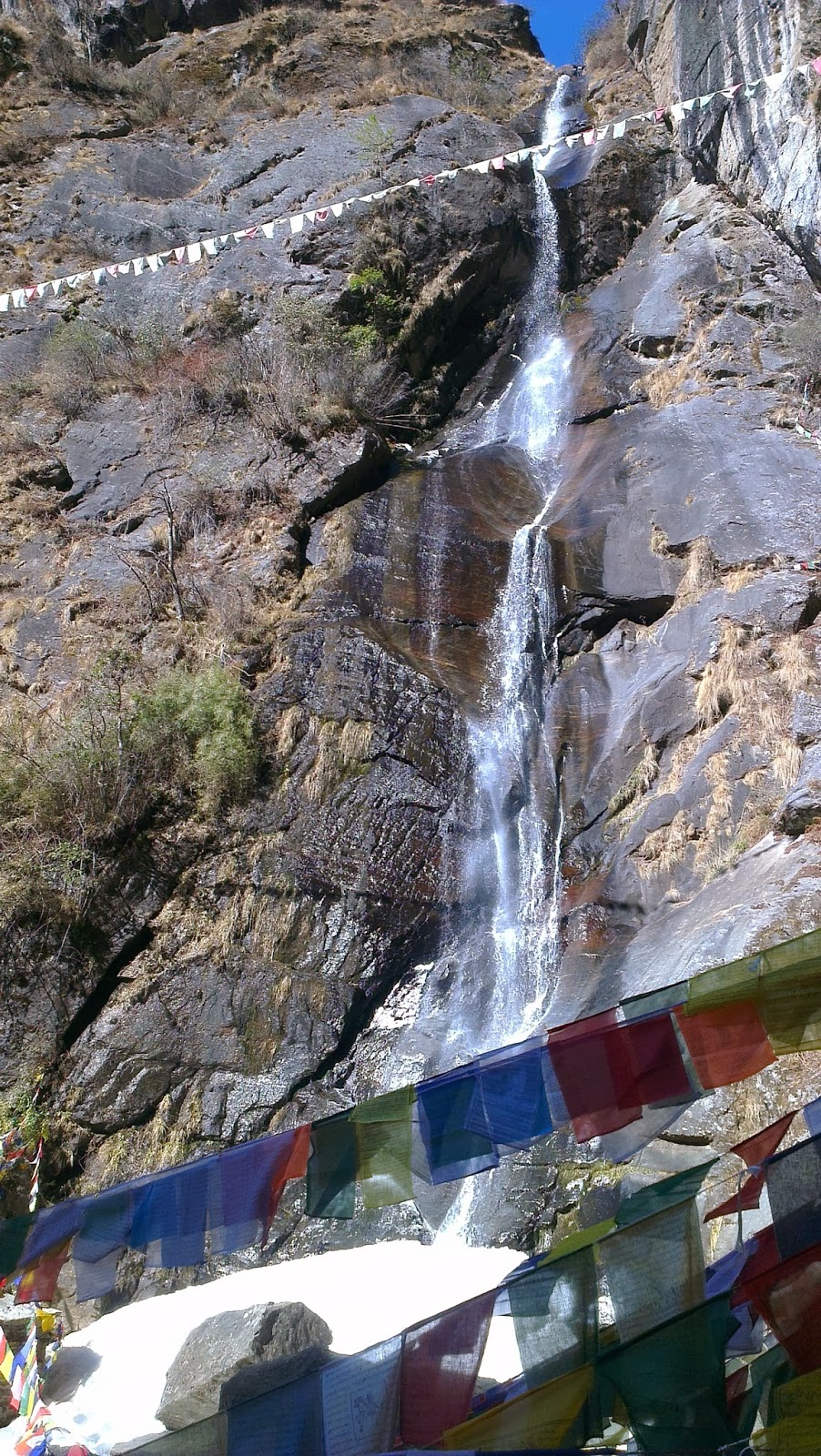 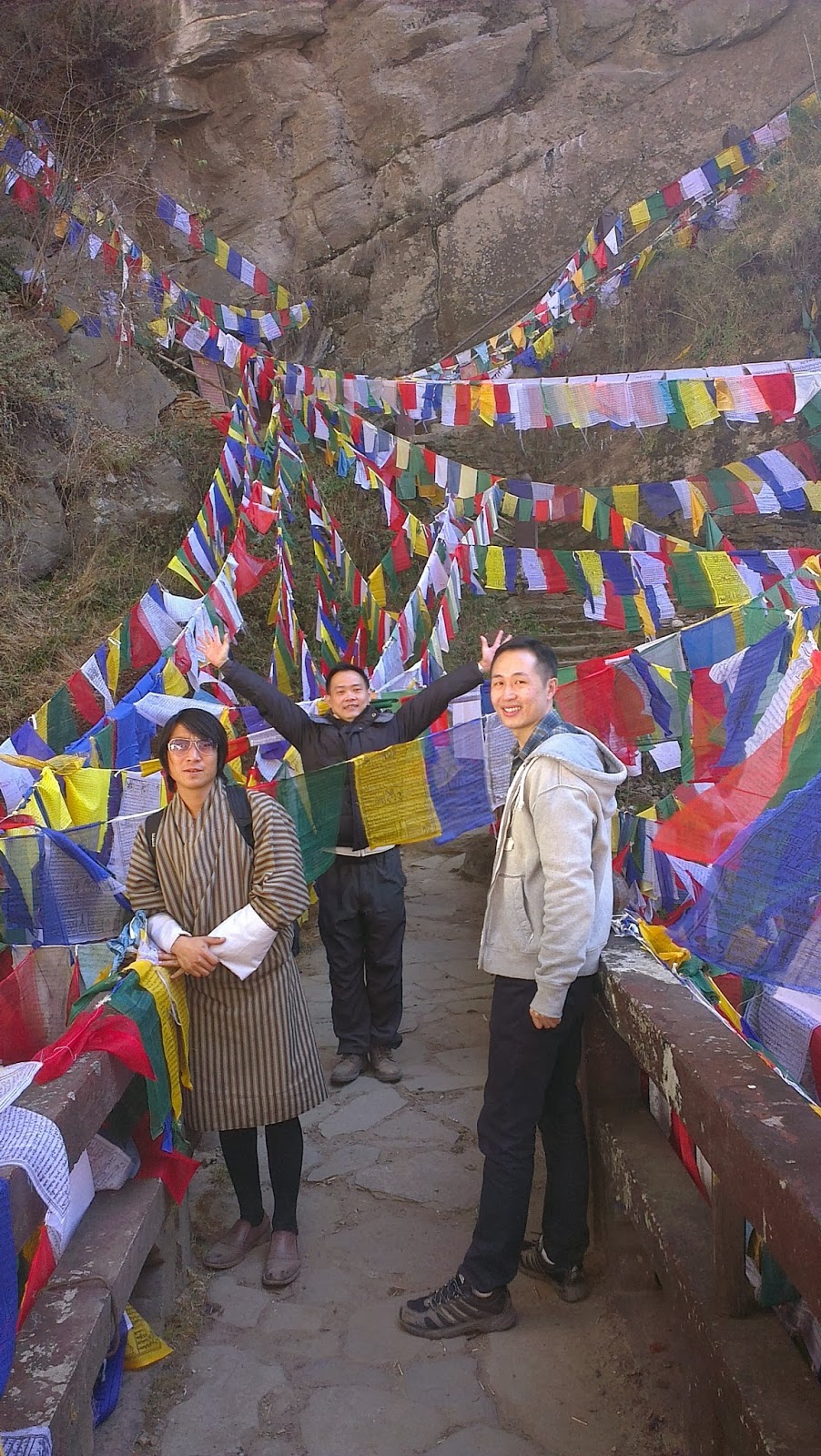 Finally, we are walking up the final steps to the temple. 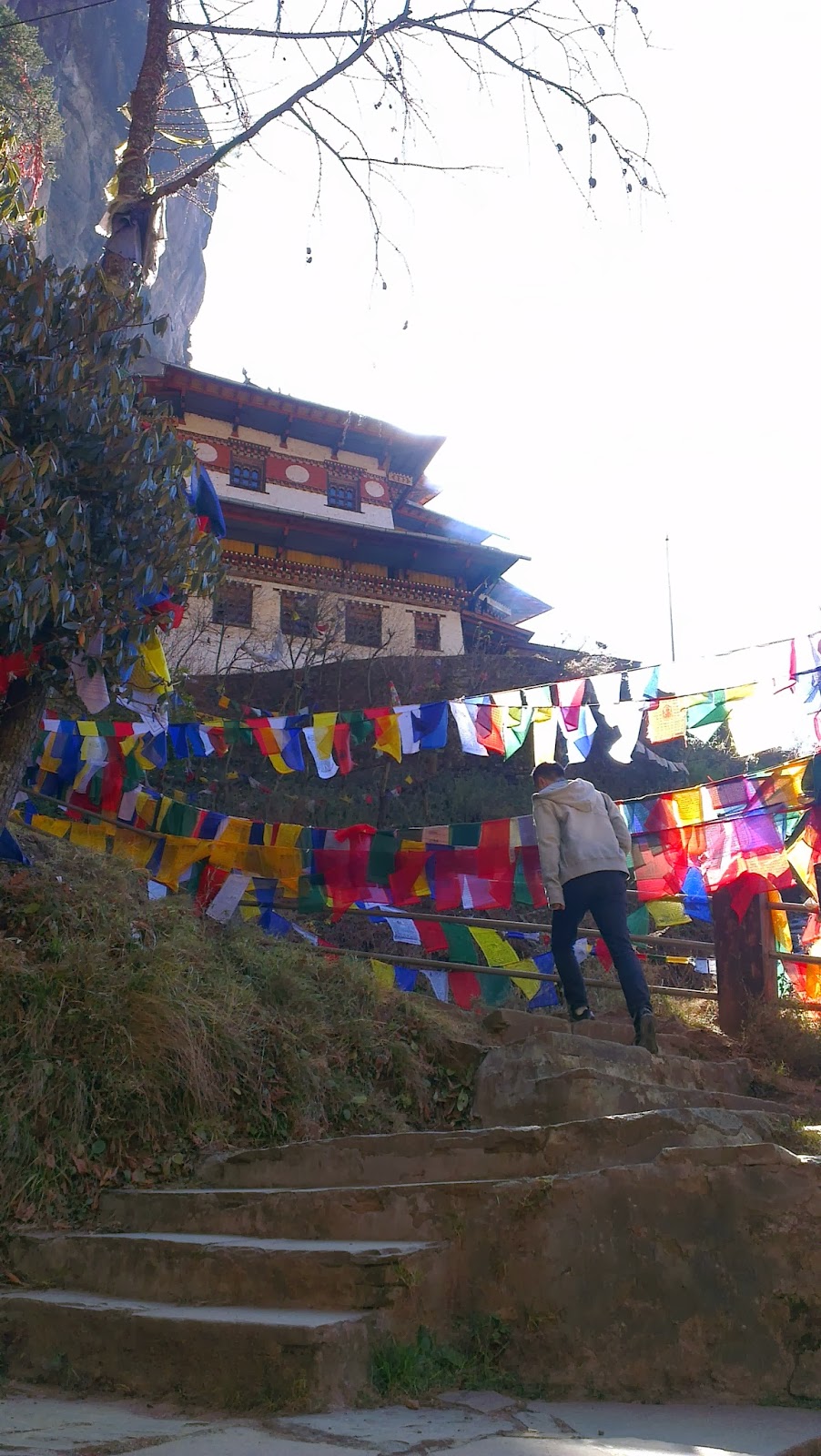 When we reached the temple, it was truly a great sense of achievement. We endured burning thigh muscles after all the trekking and climbing of stairs.

By the way, there are no pictures to post of the inside of the temple as we had to surrender our cameras and mobile phones, strictly no photo taking allowed. Its not so much a religious reason but more so for the safety of tourists.. There were 2 incidents of tourists falling off the cliffs while they were busy taking photos, hence the government imposed this rule.

Inside was really something. There were 3 temples inside and the structure was amazing. How did they build this thing? You really have to visit this place for yourself.  The view of course was breathtaking.

After touring the temple, we were hungry as it was already past lunch time. We were supposed to have our lunch at the cafeteria. Morale was high now. We've completed the toughest part of our trip. Going back wasn't easy, but we can do it.


After lunch, we continued our trek back to base and it wasn't as gruelling as it was mostly downhill. However, as my knees weren't too good, I could feel the rubbing of my joints going downhill. When we reached the vehicle, whoa, it felt so good to sit down comfortably.

Next stop, to Kyichi Lhakhang, the oldest temple in Bhutan, built in the 7th century. Look at the architecture. Compare this with all the other dzongs that you've seen in my pictures, their tradition have carried on for centuries, I'm truly amazed. 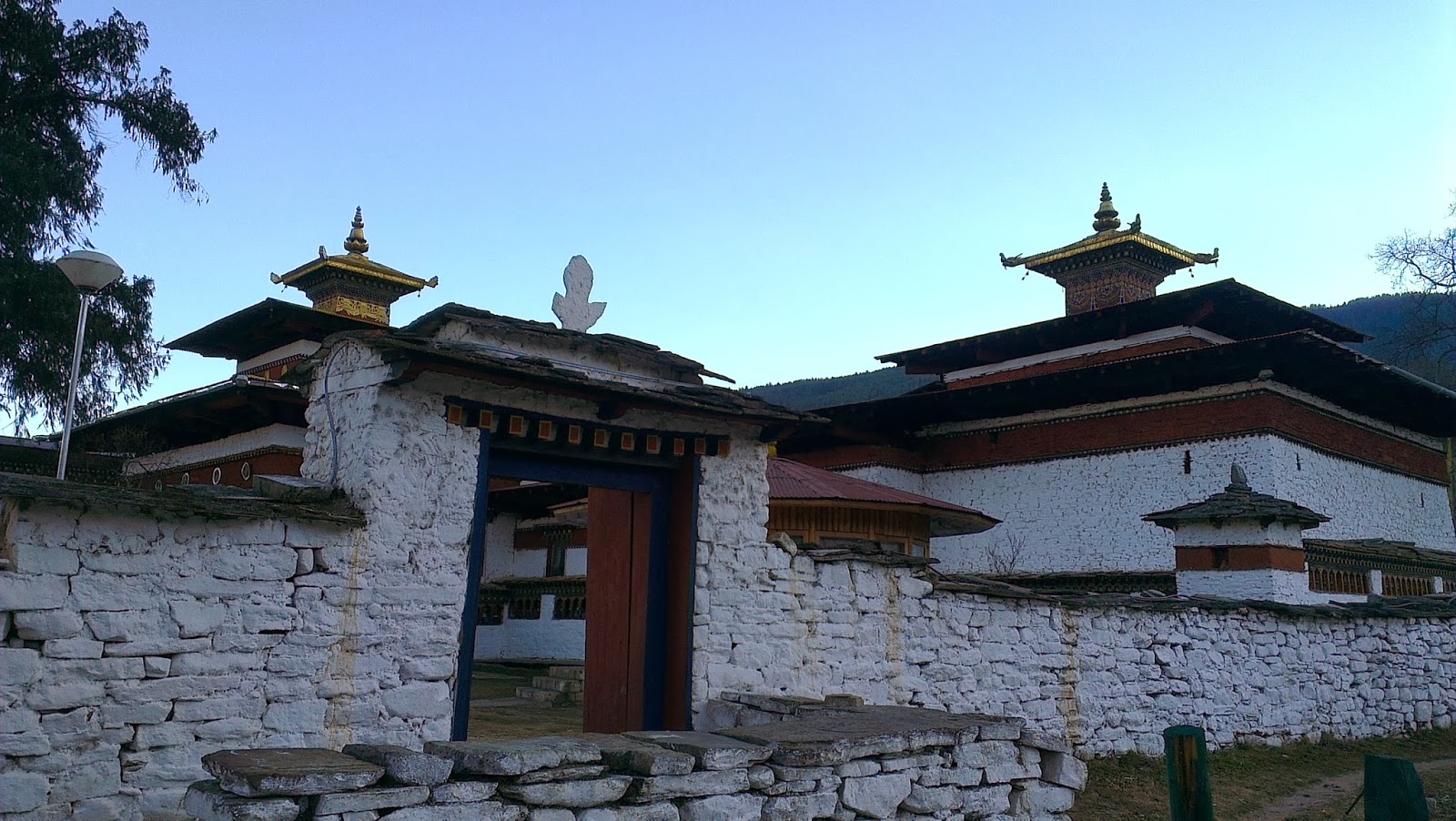 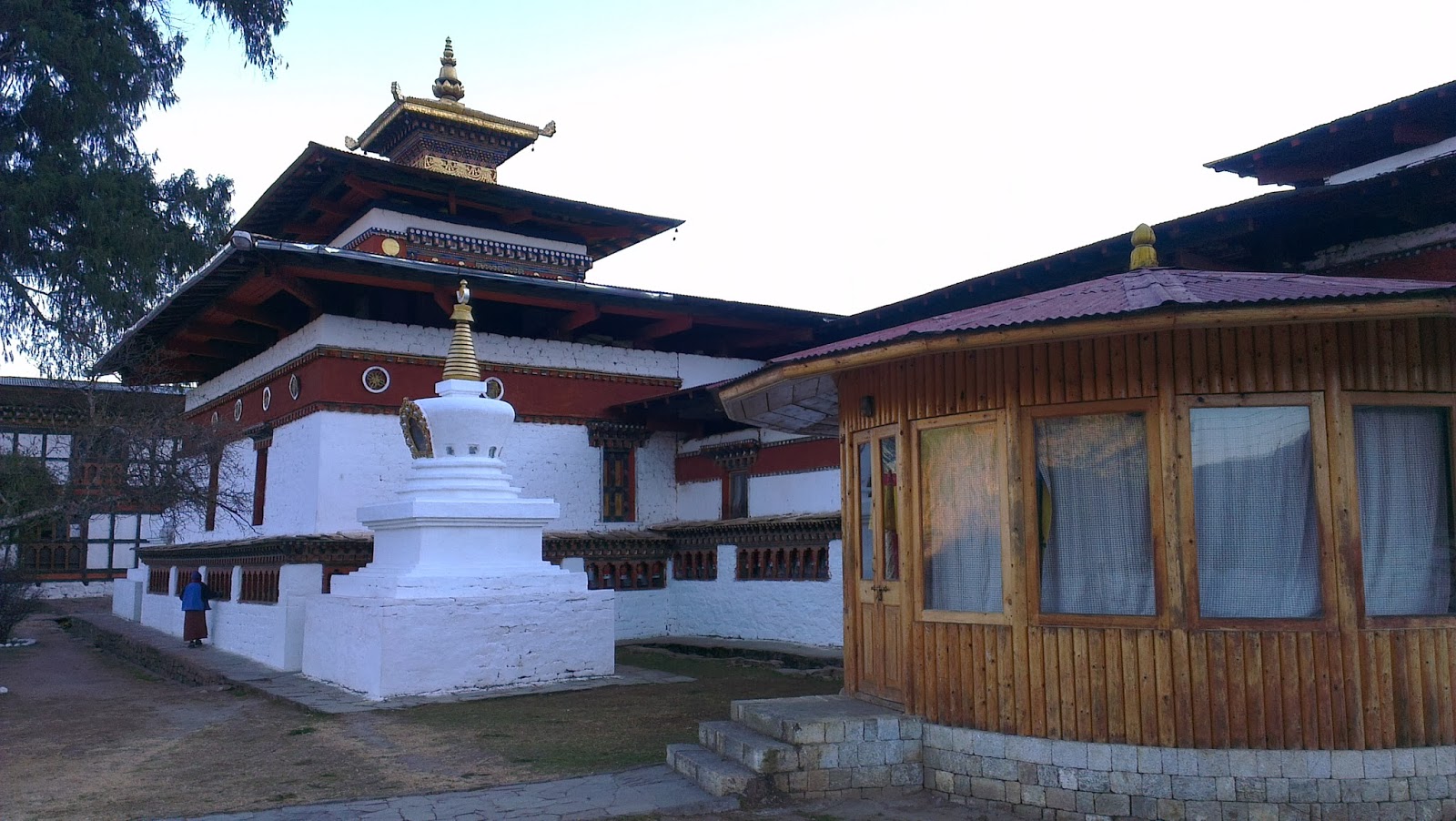 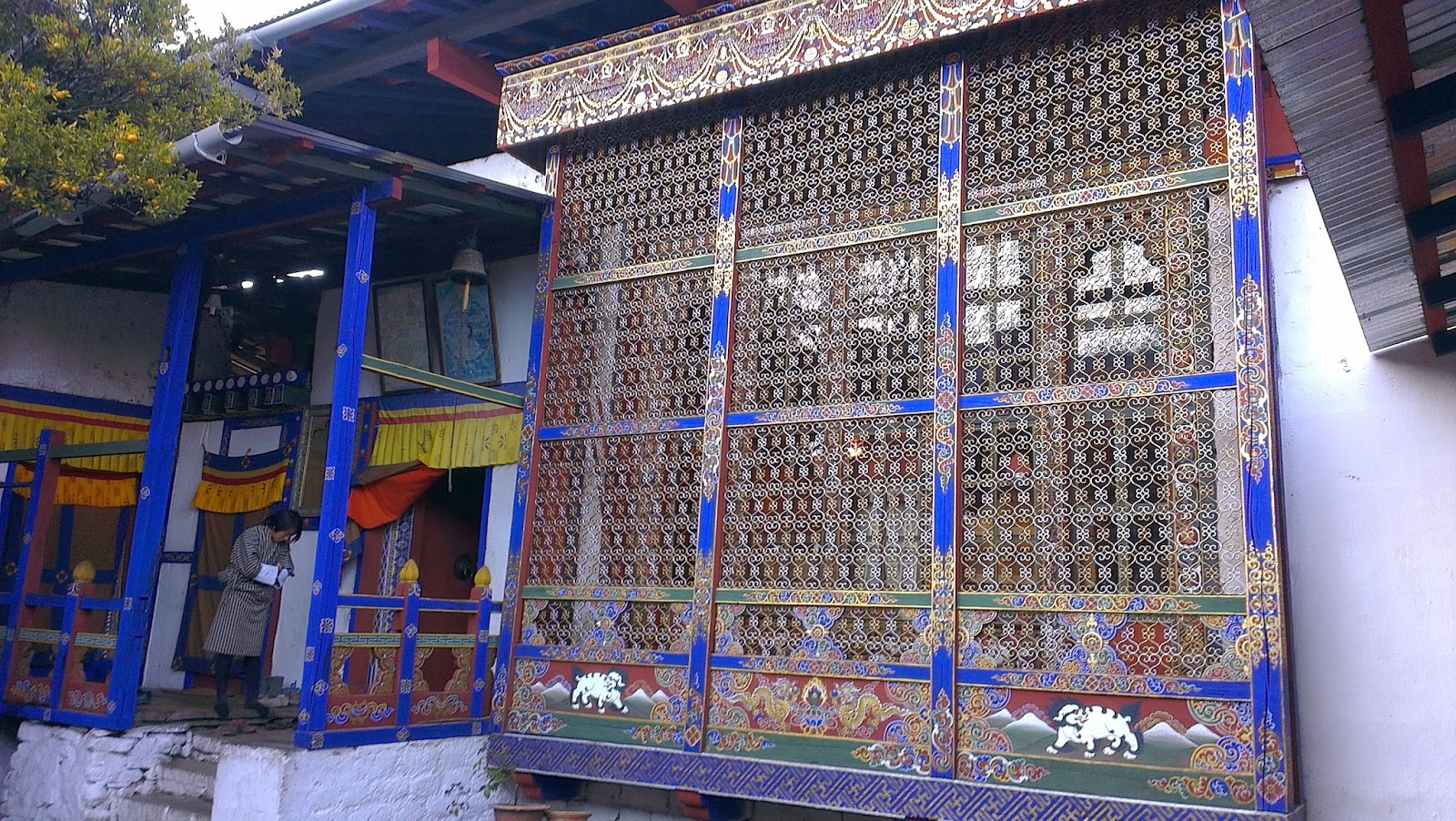 This is our last attraction and we're pooped. Good thing this temple was only a 15 minutes drive back to the hotel. We sure got a good night's sleep.

Sigh, tomorrow will be the end of our holiday. SAD.

Posted by Mountain Tortoise at 07:40