It's Christmas Eve, and I guess my dream of a White Christmas will have to wait another year. Was hoping it would snow again in Bhutan, no such luck.

After a hearty breakfast, where we requested for 4-5 (I think so, could be more) refills of the basket of sliced toasts, we started on our 2-3 hours journey eastward to Punakha. Punakha is not very far away from Thimphu, but because we'll be meandering through and going up and down mountains and valleys, plus the road conditions are less than ideal, it would be a long and bumpy ride ahead.

We will be passing Dochula Pass, at 3,050m, this beautiful pass with its 108 Bhutanese stupas was built by Her Majesty! The Queen Mother Ashi Dorji Wangmo Wangchuck, to commemorate victory over the Indian militants and to liberate the souls of the lives lost

At Dochula Pass, we were awed by the scenery around us. There was a sea of clouds with mountains everywhere. Simply awesome. 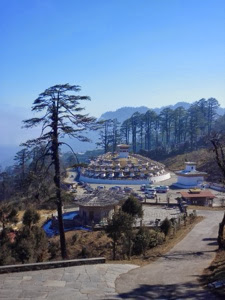 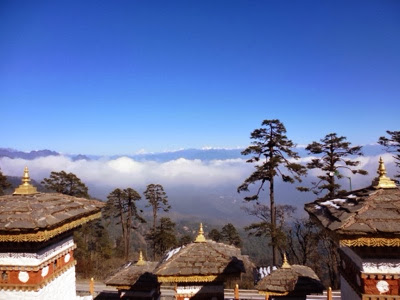 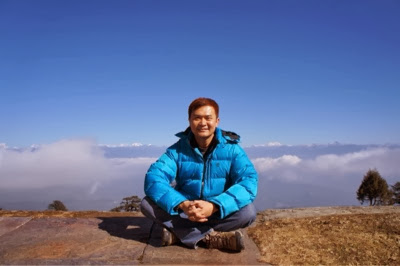 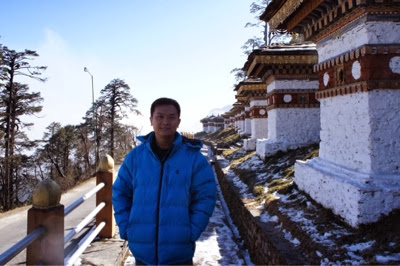 Well, at least there were traces of snow, maybe a semi-white Christmas. It was cold and freezing and we went to a nearby cafe in a hotel for hot drinks and snacks. It must be nice to wake up in the morning to a sea of clouds overlooking the Himalayan ranges. 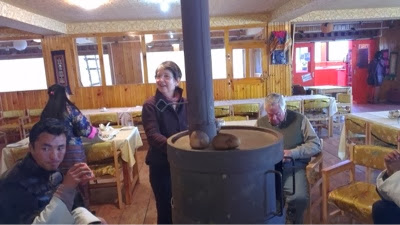 Braving the cold, we still continued snapping away the awesome view around us. 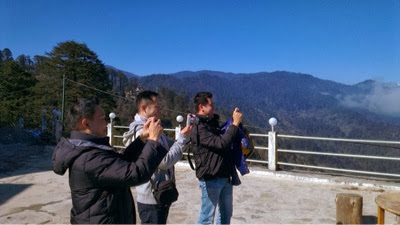 Lunch was about 1 hour away and we had it at this beautiful but simple restaurant, overlooking an awesome valley. 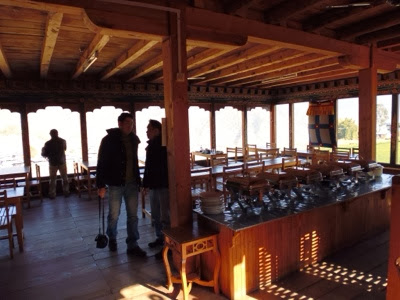 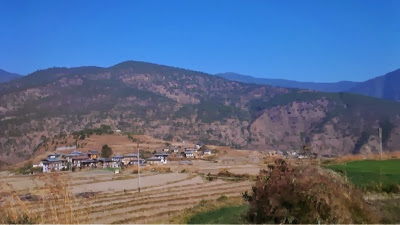 Lunch was as usual, simple and rustic. After lunch, we trekked across the valley to Chhimi Lhakhang. This is a temple dedicated to the divine madman, also known as Drukpa Kinley, who was a famous teacher with whom the phallic symbol is associated. On the walls of the temple are painted pictures of the master's amorous deeds. Apparently, several Japanese and American couples have visited this temple and were blessed miraculously with children after being barren for years.

On the way, the view was too breathtaking to not take pictures. 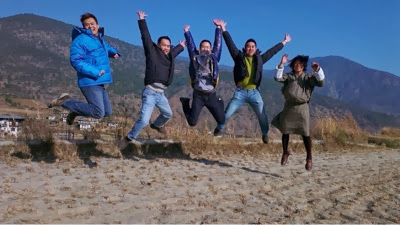 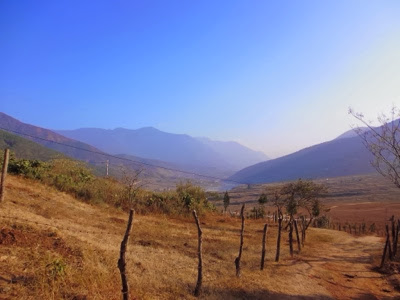 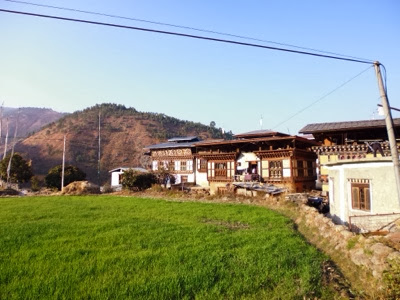 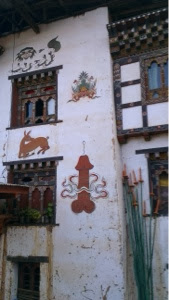 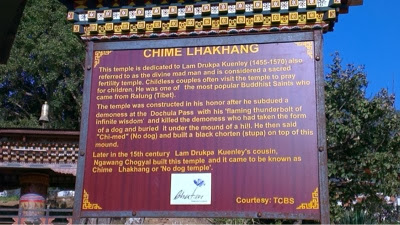 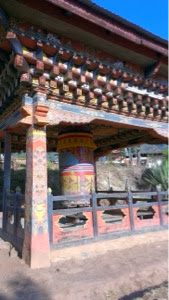 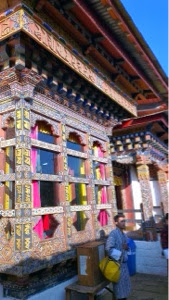 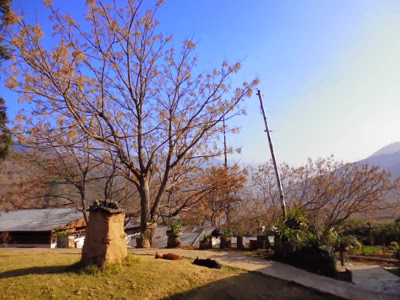 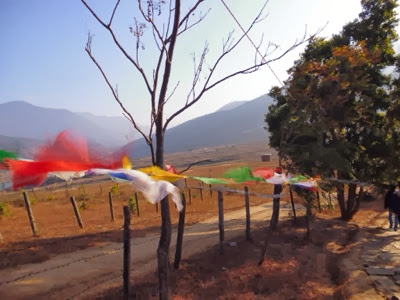 Next up on our itinerary a short drive to the other side of the valley to experience the longest suspension bridge in Bhutan, the Pho Chhu Suspension Bridge. It is 160 metres and gives you spectacular views of Punakha Dzong and the Pho Chhu Valley.

If you recall, upon arrival in Paro, we crossed a short bridge, which I mentioned was chicken feed, that was a precursor to this one. I really had to psych myself to cross it. See the pictures and you'll know why. 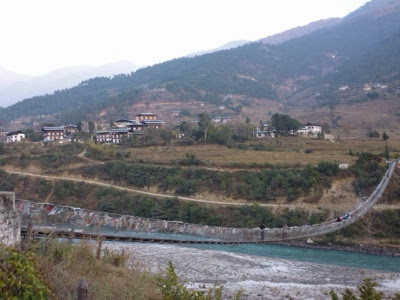 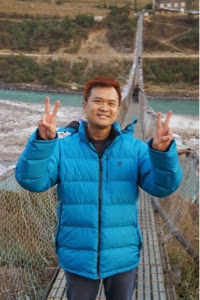 I really didn't dare look down while crossing it. I just followed behind my buddies and Chunjur, eyes straight ahead, and I daren't even take out my camera to take pics in the middle for fear of dropping it haha. 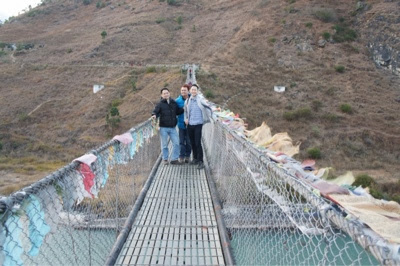 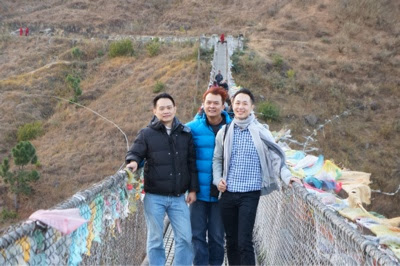 This is what's on the other side. A grocery store. It was supposed to be dry Tuesday (government sanctioned no-sale-of-liquor day), but nothing's going to stop those crossing the bridge from celebrating their small victory conquering their fears with a few bottles of beer and snacks. 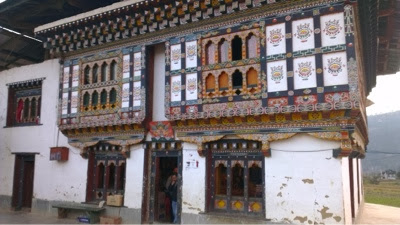 After this one small victory for me, we proceeded to check-in to our accommodation, Hotel Lobesa. 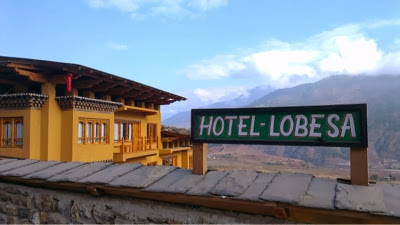 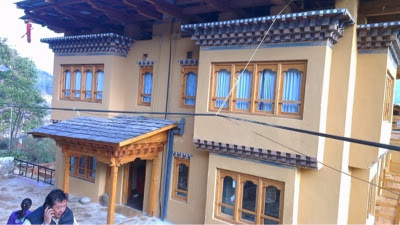 The hotel room had a view of the valley and was huge. Looks new but same problem, heater provided couldn't keep the room warm, only when you are standing next to it. Toilet was large and it was such a drag to shower in below 0 degree Celsius. 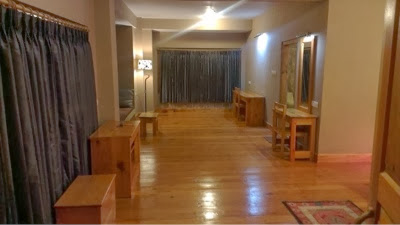 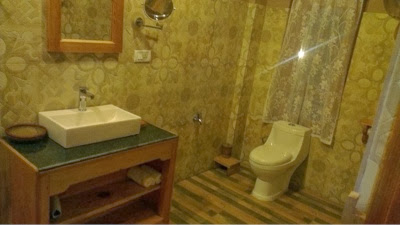 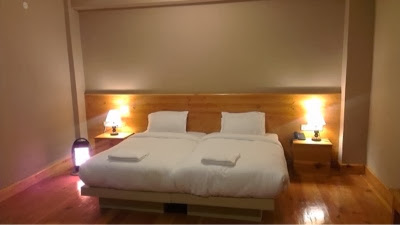 After dinner, we got a pleasant surprise. Chunjur with a few of the other guides from the same agency surprised us with a Christmas-themed cake and a bottle of wine. 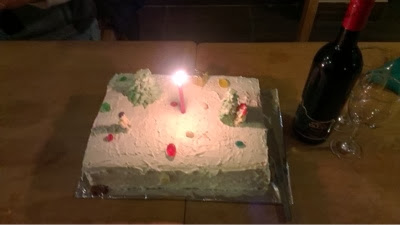 All of the guests and guides decided to have a celebration and the guides sang Bhutanese songs and taught us to dance. We really had our own dance party there and then as the night spots nearby was closed due to dry Tuesday. 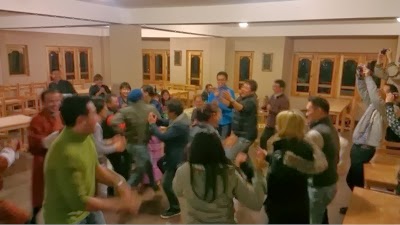 After about an hour of merry making, we retired to our rooms for another long day tomorrow.

PS:
I was touched by the tour agency and guides as they were very thoughtful to organize a celebration for Christmas for us, even though they don't celebrate the occasion. In fact, they paid attention to little details, which I shall tell you more about in the later blogs.

Posted by Mountain Tortoise at 11:26